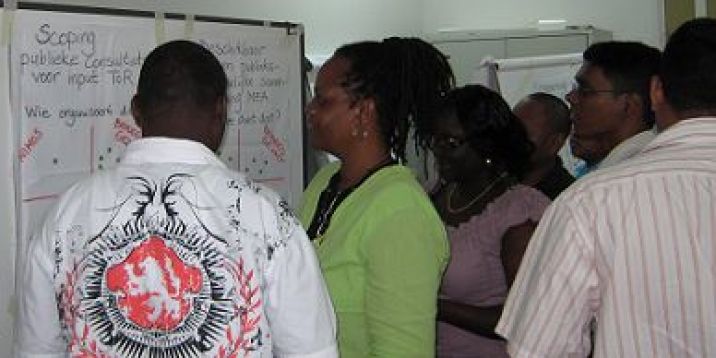 NIMOS (the National Institute for Environment and Development in Suriname) has a similar role in the Surinam EIA system, as the NCEA does in the Netherlands. in 2009, NIMOS noiced that the use of EIA information in decision-making in Suriname was often insufficient. It invited the NCEA to give two workshops on the value and use of EIA and EIA reviewing. These workshops were held in March 2010 and were well received.

NIMOS requested the NCEA to organize two workshops, which were held in March 2010:

The workshop programmes were developed cooperatively by the NCEA and NIMOS. NIMOS further organized the practical and logistic aspects of the workshop. The NCEA was responsible for presenting relevant cases, for example from the Netherlands. These cases considered EIAs for which decision-making had already been finalized. They were analyzed in order to draw lessons for future decision-making based on EIAs.

The workshops were highly appreciated. Participants indicated that the group work based on EIA cases gave them various relevant insights, varying from general awareness on EIA to procedural details. NIMOS participants appreciated to see the differences between the EIA systems of Suriname and the Netherlands.