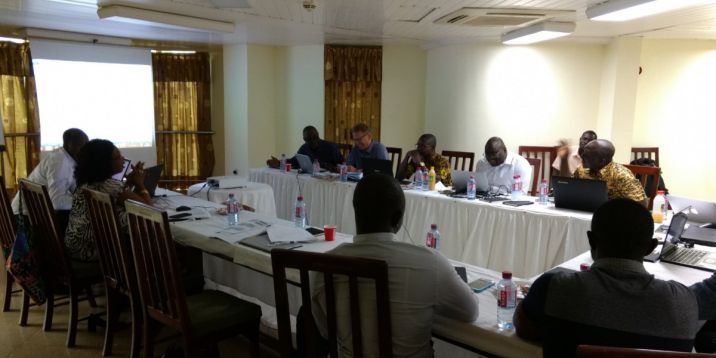 NCEA Coaching and support of an SEA for the Voltaian basin for oil and gas exploration in Ghana, to be developed in 2016 and 2017.

The formal launch and pre-scoping workshop for the SEA on opening up the Voltaian Basin for oil and gas exploration took place on 29 February and 1 March in Accra. The workshop was a follow-up of the kick-off of the SEA in November 2015. At both occasions, the NCEA was present.

Nov. 2015 NCEA’s contribution to the kick-off can be summarized as drawing attention to the lessons learned from the off shore SEA. In a presentation, positive results were highlighted, but also issues to be improved were mentioned. In preparing the presentation, use was made of an impact assessment done by NCEA on this particular SEA.

March 2016 NCEA’s contribution to the launch was supporting the drafting of a road map for the next steps in the SEA process. Specific issues were discussed such as (i) timing and planning linked to decision making, (ii) baseline information and (iii) community consultations. The SEA team produced a report on the launch and pre-scoping workshop

Thereafter the SEA team (16 persons) continued with the following activities (no NCEA presence):

June 2016 The team had Regional Stakeholders’ consultation in five regions. At the same time a desktop review was done based on the following sources:

August 2016 SEA team meetings to analyse the results of consultations, baseline information, scenarios etc and compiling of draft Scoping Report. The Scoping report was shared with NCEA only in April 2017, and was printed in June 2017. This was the first formal product of SEA. NCEA did a review the scoping report, but did not notice any major gaps or issues, actually it was found to be a very clear report.

Between September 2016 and March 2017 The next steps in the SEA were delayed because of the General Elections in December 2017 and because the SEA department had too many (7 for the time being) SEAs ongoing at the same time.

April/May 2017 SEA team meeting to do the assessment part of the SEA. This covered:

The team also visited Uganda, where NEMA Uganda shared their experiences with the Ghanaian SEA team. The Albertine Graben areas where oil production will start (Kingfisher area and Murchinson Falls) were visited.

July 2017 SEA team meeting. NCEA’s main contributions consisted in participating in the discussions, providing comments on the 85 recommendations (during the plenary sessions) and supporting the team in drafting an SEA implemention plan for the follow up after finalization of the SEA (planned for September).

The next steps of the SEA will be the drafting of the SEA summary, SEA contents report and SEA process report. When these are ready, these will be presented to the most important Ministers.